Birth registration now at the doorstep of Nigerians 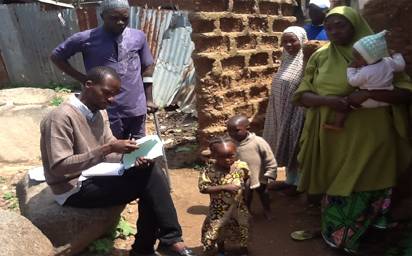 Birth registration now at the doorstep of Nigerians

hen the United Nations Children Fund, UNICEF in collaboration with the Bauchi state government and the National Population Commission, NPC, flagged off the massive birth registration campaign of children under the age of five years in the state, residents of communities heaved a sigh of relief that the end had come to giving birth to children without birth certificates.
The birth registration efforts in Bauchi state which is a project put together by the European Union, EU, UNICEF Maternal, Newborn,Child Health and Nutrition, MNCHN, project was widely accepted because of the massive sensitisation campaign by stakeholders such as traditional and religious leaders, local government actors, NGOs and the media.

According to a UNICEF survey, Bauchi was among States in the Northeast that had the highest number of children not registered at birth. An estimated 600,000 children were unregistered at birth and this was a concern to stakeholders in the state, which necessitated the conduct of a house-to-house birth registeration exercise by UNICEF in all the 20 local government areas of the state.

Prior to the commement of the house-to-house registration which kick- started from the 6th through 16th of July 2017, the State Governor, Mohammed Abubakar, during the flag off ceremony at the Government House, Bauchi, assured that all primary healthcare facilities and government hospitals in the state would have a desk officer dedicated to the registration of births

All the relevant state government agencies and departments, would also key into the initiative of the UNICEF MNCHN project to ensure that henceforth all births in the state are registered and appropriate certificate issued.

The exercise, according to the UNICEF Bauchi Field Office, Abdulai Kai-kai, was funded by the EU as a collaborative effort of the UNICEF, NPC and the Bauchi state Ministry of Health and Primary Healthcare Development Agency.

From January 2014, no fewer than 1,292 health workers in various health facilities across the state were trained on birth registration process.

As part of the activities marking the conduct of the household birth registration exercise in the state, 10 journalists visited were sent to all the 20 Local Government Areas of the state for effective coverage and to assess the level of preparedeness of residents in communities.

Rewarding experience: The field experience was rewarding. Good Health Weekly visited Giade and Kirfi LGA where the birth registration exercise by communities courtesy of the massive sensitisation efforts of traditional rulers and other relevant stakeholders in the areas.

For instance, in Giade LGA that comprises 13 wards, field workers were seen going from house to house with booklets that contained registration forms and the certificate.

One of the participants and beneficiaries of the exercise was Habiba Abdullahi, a housewife, who noted that the house- to- house registration was first of its kind in the local government.

Habiba who said the certificates were given free of charge to residents was elated.

“I have never seen this kind of intervention where a birth certificate is brought to your doorstep and is even given free of charge. I commend UNICEF, NPC and the Bauchi State government for this iniative,” she recounted.

In a chat, the Comptroller of Giade LGA, Musa Saleh, said the NPC was targeting 24,000 children for the birth registration exercise but pointed out the number could increase as the exercise continues.

He attributed the hitchfree activity to the massive sensitisation carried out by traditional rulers and other stakeholders.

Success recorded: ” So far, the exercise has been a success because of the enlightenment campaign on the importance of birth registration. The people in the area are cooperating as expected and no case of resistance has been reported,” the Saleh stated.

In Kirfi LGA, the status of the exercise was similar to the experience in Giade as there was unanimous support and acceptance of the birth registration campaign.

In some wards such as Kirfi, Bara, Beri, Shango, Wanka, Badara, Gwaga, Dewu, Tubule, field workers went from house to house registering every child under the age of five.

In most households, women were seen in clusters trooping out to register their children. They expressed joy over the intervention by UNICEF, saying it had assisted in defining the future of their children.

Valid identity: “We are very happy because of this intervention and our children now have a valid national identity which will open doors for them in the future,” a housewife, Hamila Mohammed noted.

The Village Head of Badara community in Kirfi,Yusuf Aliyu described birth registration as the rigth of children and that no parent should deprive a child from being registered.

Aliyu explained that only through birth registration could government know the actual population, new births and children, which he pointed out would assist greatly in national planning.

He noted that unlike the polio immunisation exercise that generated some resistance, the birth registration exercise was fully accepted by the people.

Prior to the kick off of the exercise, all village heads in the 30 wards of the LGAs had met and agreed to sensitise their people on the importance of birth registration, it was gathered.