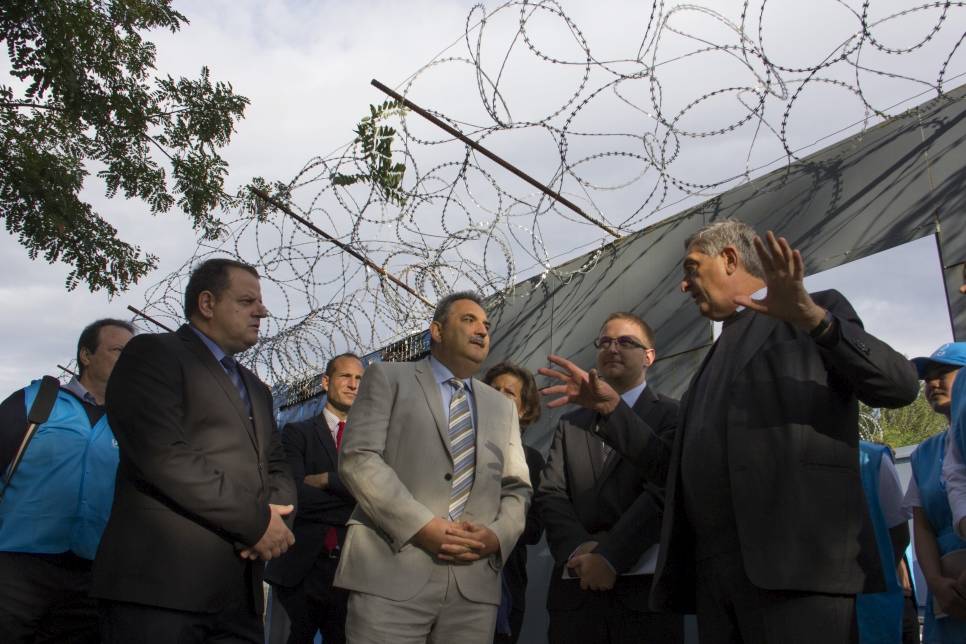 Budapest – UN High Commissioner for Refugees Filippo Grandi called on Hungary to improve access for people seeking asylum and to do away with its so-called border “transit zones,” which he said are in effect detention centres.

In Budapest, he met Minister of Foreign Affairs Péter Szijjártó and Interior Sándor Pintér and stressed that the UN Refugee Agency recognizes the right of every country to protect its borders. But, he said, “refugee protection and security of the country can be accomplished at the same time.” He also emphasized the importance of European solidarity and of all member states, including Hungary, taking part in the EU program to relocate asylum-seekers from Greece and Italy.

In his meetings, he expressed his concern that asylum-seekers, including children, were being kept in the “transit zones” during their asylum process. “Children, in particular, should not be confined in detention,” Grandi said Tuesday after touring the Röszke transit zone on Hungary’s border with Serbia during a two-day visit to the Central European country. He noted that children younger than 14 who arrive in Hungary alone are transferred to an open centre where they are getting good care and encouraged Hungary to maintain such a facility while expanding it to include older unaccompanied children.

“Seeking asylum is not a crime,” he said. “The refugees I met are simply in search of safety in Europe and now are extremely anxious about their future.” He appealed to the Hungarian government to ease constraints on its asylum system so that asylum-seekers entering the country face no obstacles and can have their cases heard in line with Hungary’s international commitments.

In his morning visit to Röszke, Grandi met unaccompanied children staying in the transit zone, including two 14-year-old boys who travelled to the country on their own. Ahmad, from Aleppo, Syria, fled two years earlier when he was just 12 and arrived in Hungary one month ago after a harrowing journey. He told Mr. Grandi he was hoping to receive asylum here because his family is in danger and he hopes to rescue them by applying for family reunification. Suleyman, from Kabul, showed a large scar on his arm that he said he got from a Taliban attack back home. He said he fears being forced to return and would like to stay in Hungary. Refugees in Röszke live in containers in small locked compounds. Medical care and other services are provided and informal activities for children have recently started. Asylum-seekers complain mostly of the lack of information around the asylum process and of being penned up without freedom to move beyond the many razor-wire fences.

Over the last few years, Hungary has systematically constrained its asylum system through restrictive legal measures and has virtually eliminated state support for recognized refugees to get by and integrate. Hungary has also established physical barriers, including razor-wire fences along its southern borders and restricts access to asylum by allowing only ten asylum-seekers per working day into the country. “When I was standing at the border fence today, I felt the entire system is designed to keep people, many of whom are fleeing war and persecution, out of the country and preventing many from making a legitimate asylum claim,” Mr. Grandi said.

Once asylum-seekers get into one of Hungary’s two transit zones, refugee recognition rates are low, even for people fleeing conflict-ridden countries like Iraq and Afghanistan, although the High Commissioner’s government interlocutors informed him that they were working on improving procedures.

During his visit, Mr. Grandi also visited UNHCR’s Global Service Centre in Budapest where some 500 staff members work. These include about 300 Hungarian nationals who provide essential support to UNHCR staff members protecting refugees around the world. He expressed his gratitude to the Hungarian government for its support to the Centre and to the staff who are devoting their professional skills to serve refugees.