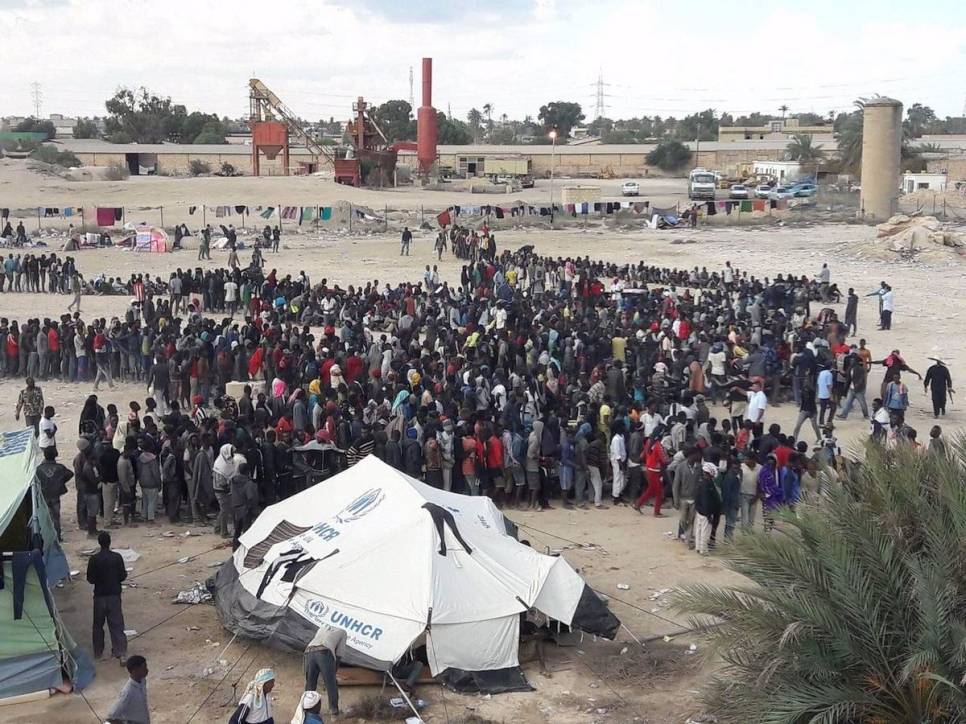 This is a summary of what was said by UNHCR spokesperson Andrej Mahecic – to whom quoted text may be attributed – at today's press briefing at the Palais des Nations in Geneva.

For over a week, UNHCR teams have been working around the clock to meet the urgent needs of over 14,500 migrants and refugees who were being held captive by smugglers in different locations, including farms, houses and warehouses in and around the coastal city of Sabratha in Libya. The refugees and migrants were taken to a hangar in the Dahman area in Sabratha that has been serving as an assembly point since the onset of the crisis. From there, refugees and migrants are being transferred by authorities to official detention centres where humanitarian agencies are providing lifesaving assistance.
Libyan authorities estimate that an additional 6,000 migrants and refugees are still being held by smugglers. If confirmed, this would bring the total number of refugees and migrants held in Sabratha to 20,500, including those in official detention centres.
Since the onset of this humanitarian crisis, UNHCR staff have been on the ground providing emergency assistance in all locations where refugees and migrants have been transferred to, and are conducting assessments to determine needs and vulnerabilities. UNHCR has delivered more than 15 truckloads of relief items, including sleeping mats, mattresses, blankets, hygiene kits and winter jackets. As a priority, UNHCR teams have been working on identifying refugees and they continue to advocate for their release. In some locations, UNHCR has provided tents that are being used as makeshift hospitals where UNHCR doctors are providing medical assistance.
UNHCR colleagues on the front lines describe a picture of human suffering and abuse on a shocking scale. Amongst the refugees and migrants who suffered abuse at the hands of smugglers, there are pregnant women and new born babies. Hundreds of people were discovered with no clothes or shoes. Scores of them are in need of urgent medical care, with some suffering from bullet wounds and other visible signs of abuse. Refugees and migrants who were rescued from the smugglers are visibly traumatized. Most of them say that they were subjected to numerous human rights abuses, including sexual and gender-based violence, forced labour and sexual exploitation.
Many say they were beaten and forced to work for long hours without any food or water. They were kept in cramped conditions, often without any toilet facilities or ventilation. When found, hundreds told us they had not eaten for days. UNHCR staff have identified a worrying number of unaccompanied and separated children, many under the age of six. A large number of them report losing parents on the journey to Libya or in the chaos that resulted during the events of the last few weeks.
The authorities are working very closely with UNHCR and other humanitarian partners to respond to the growing needs. But the scale of the emergency has overwhelmed existing facilities and resources. Detention centres and assembly points are now at full capacity and lack basic amenities like water tanks and sanitation facilities. Many people including children are having to sleep outside in the open.
The devastation in Sabratha further reaffirms the need for international action and highlights the high price refugees have to pay to reach safety in the absence of safe legal pathways. UNHCR will continue to call on resettlement countries and the international community to step forward and open more resettlement places and look for a way to protect vulnerable refugees who need international protection.
For more information on this topic, please contact:
In Tunis, Bathoul Ahmed, ahmedba@unhcr.org, +216 20 697 635
In Geneva, William Spindler spindler@unhcr.org, +41 79 217 3011