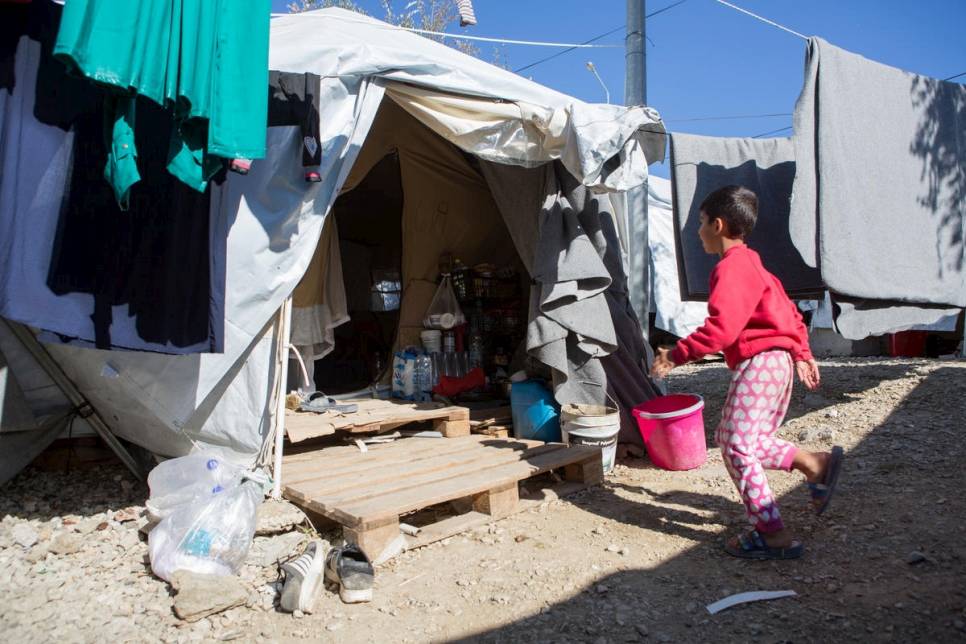 This is a summary of what was said by UNHCR spokesperson Cécile Pouilly – to whom quoted text may be attributed – at today's press briefing at the Palais des Nations in Geneva.

UNHCR, the UN Refugee Agency, remains very concerned at the situation of refugees and migrants on the Greek Aegean islands, in particular Lesvos, Chios and Samos. In this context, UNHCR welcomes important efforts to speed up transfers to the mainland over the past weeks.

Since mid-October, some 6,000 asylum seekers have been moved by the Greek government out of the islands with UNHCR’s support. This is among efforts being taken to ease conditions in overcrowded reception centres, and transfer the more vulnerable to safety as winter sets in.

However, some 10,000 asylum seekers are still crammed into government-run facilities on the islands, double the design capacity. The situation continues to be critical in the reception centres of Moria on Lesvos and Vathy on Samos.

Time is of the essence and the accelerated pace of departures for asylum seekers authorized to move should be maintained. UNHCR is calling on the Government to continue easing pressure on Lesvos, Chios and Samos, by further shortening procedures for people eligible to move, and urgently improving conditions for those who continue to stay.

Specifically the current restrictions which keep people on the islands needs to be reviewed to allow for the quick transfer from Reception and Identification Centres (RICs) of vulnerable asylum seekers and others who could continue the asylum procedure on the mainland.

Tension in the RICs and on the islands has been mounting since the summer when the number of arrivals began rising. This coincided with the government taking over responsibility for infrastructure and services in the RICs, facing problems that still need to be addressed.

In some cases, local authorities have opposed efforts to introduce improvements inside of the RICs. On some islands, local reluctance has also hampered efforts to secure small numbers of temporary and exceptional accommodation in apartments and hotels for the most vulnerable.

We hope that these problems can be quickly solved and that people staying in the RICs can access warmer and safer conditions with adequate shelter, electricity and functioning water and sanitation facilities.

In light of the difficult situation on several islands, UNHCR since October has handed over some 240,000 relief items to authorities to improve the situation at reception centres, including winter kits, blankets, and sleeping bags. We have also recently installed 18 accommodation units in the Kara Tepe site, which is managed by the Municipality of Lesvos, in addition to 242 installed earlier this year.

More than 1,700 people have reached the Greek Aegean islands so far in December, continuing a trend of higher arrivals – some 19,800 since July this year. This includes large numbers of families and many people needing specific support. Over 70 per cent of all arrivals this year were Syrian, Iraqi or Afghan, and four out of ten were children.