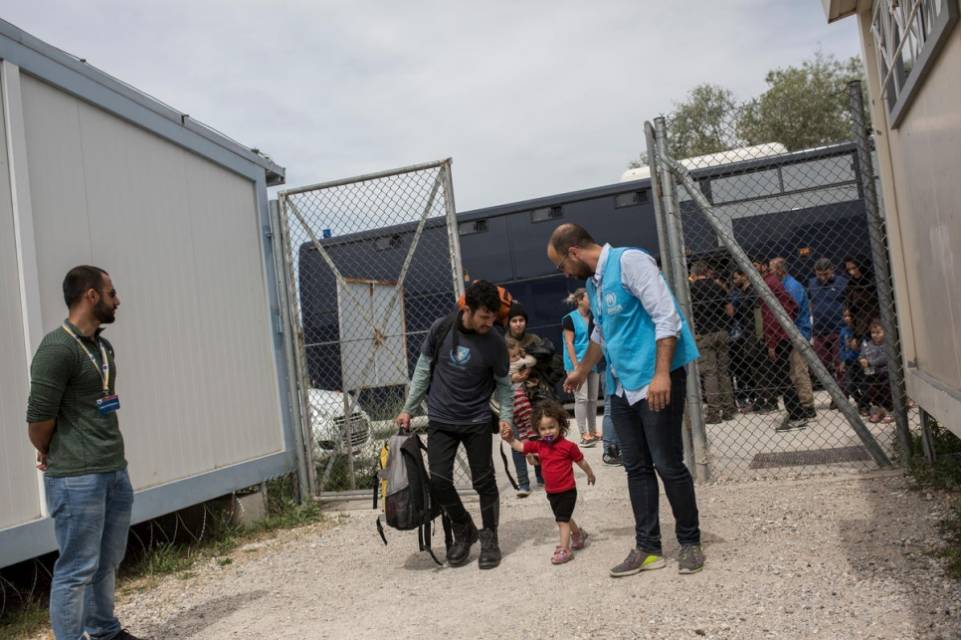 PYTHIO VILLAGE, Greece – As dawn breaks over Greece’s north-eastern Evros region, a group of three families with adults and children tramp through Pythio and Thourio, small villages on a country backroad.

“We’ve been travelling for three days directly from Kobani,” [on the Syrian border with Turkey],” says one of the group, that wants to reach the city of Thessaloniki, more than 300 kilometres to the west. “We are hungry and thirsty. We need help for our children,” the middle-aged woman says.

Later in the day, two young men stride past the ancient Byzantine castle that looms over Pythio. They are from Afghanistan, and it has taken them eight months to reach this point. “We are going to Athens,” explains 22-year-old Safiullah, who comes from Kunduz in northern Afghanistan. His equally determined compatriot, Lalgul, 25, is from Baghlan and they met on the road.

Both groups have made the dangerous crossing from Turkey across the nearby Evros River, which forms all but 12.5 kilometres of the 190-km border. The day before, a body was found, the 12th on the Greek side this year and compared to nine in all of 2017. “It’s a very big figure for us and we expect more,” forensics scientist Pavlidis Pavlos tells UNHCR, the UN Refugee Agency, adding that others, including children, have been reported missing recently.
These are relatively sporadic encounters in the fields and forests flanking the Evros River compared to March and April, when the daily arrivals in this and other areas rose significantly, putting a severe strain on the inadequate and stretched reception capacity in the Registration and Identification Centre (RIC) at Fylakio in northern Evros, which all asylum seekers should pass through. The numbers in May have dropped just as dramatically, easing the pressure at least temporarily.

In April, over 3,600 refugees and migrants crossed to Evros, compared to some 3,000 by sea to the Aegean islands near Turkey. It was the first time in years that land arrivals surpassed sea arrivals. The total number of Evros arrivals from January-May was some 7,200 compared to an estimated 5,600 for the whole of 2017, according to data collated by UNHCR. The new arrivals came primarily from Syria, Iraq and Afghanistan and included many families with children.

Faced with the unexpected influx, the overwhelmed police held hundreds in substandard police facilities until they could be moved to the Fylakio RIC for the obligatory registration and identification. People in need of protection must be able to undergo reception procedures, receive information and ensured access to asylum at the Fylakio RIC, a closed facility with a 240 capacity, with unaccompanied children accounting for almost half. The RIC struggles to conduct the procedures in a timely manner because it lacks core services such as interpretation, medical and pyscho-social assistance.
Police subsequently released more than 3,000 people, most of whom moved to open reception sites in northern Greece, such as crowded Diavata, a former military base near Thessaloniki.

Releasing people from detention is vital, families and children should not be detained. At the same time it is important that people get information to access care and asylum procedures. Many of these people remained without appropriate protection and assistance.

Greek authorities in Evros attribute the sudden fall in the number of arrivals in Evros, at some 1,450 in May and 227 in the first 10 days of June from the April high, to a variety of reasons, including new operational strategy and increased border cooperation with Turkey.

“Now the situation is manageable, but it is necessary to be prepared in case there is an increase in arrivals,” said Panagiotis Koutouzos, police director in Alexandroupolis, who covers the lower part of the Evros River.
He and other officials, including the RIC director Irene Logotheti, agree on the need for improvements in various areas. “We need to expand, Logotheti says. “A capacity of 240 [in the RIC] is too low.” She highlighted the medical gap as a huge problem. Most people stay for only a handful of days.

UNHCR, which has a small but important protection team in Fylakio and offers close support to the Evros authoriities, has recently proposed the implementation of short and long-term measures to improve the government’s response capacity in Evros. These include the need to urgently enhance capacity of the RIC as well as improve services and conditions.
The agency has also proposed setting up mobile registration units, identifying open transit sites where arrivals from Evros can be directed and undergo registration and identification procedures. Families and children in detention should be released and moved to safe shelter and referral to services. UNHCR has also call for increasing the registration capacity of relevant Greek staff to ensure access to asylum and timely registration.

Meanwhile, people continue to arrive at Diavata and similar sites, as the government and partners strive to find or prepare appropriate accommodation. Living in colourful tents dotted around the edge of Diavata, many are refugees from the Syrian city of Afrin.

The night before, about 100 people arrived overnight from Evros but only 50 people in Diavata were due to be taken to appropriate shelter elsewhere, which can take a month. New arrivals outnumber those living in containers by 1,300 to 700, in a site with a capacity for 900.

Mahmoud Mustafa Atar, a 37-year-old electrician from Afrin, and his wife and two sons shares a container with other families from Afrin and longs to get his own shelter. He worries about the future and mourns the past. “Afrin is my city, the place where I was born and raised,” he says, adding: “All I can do is save my wife and children.”