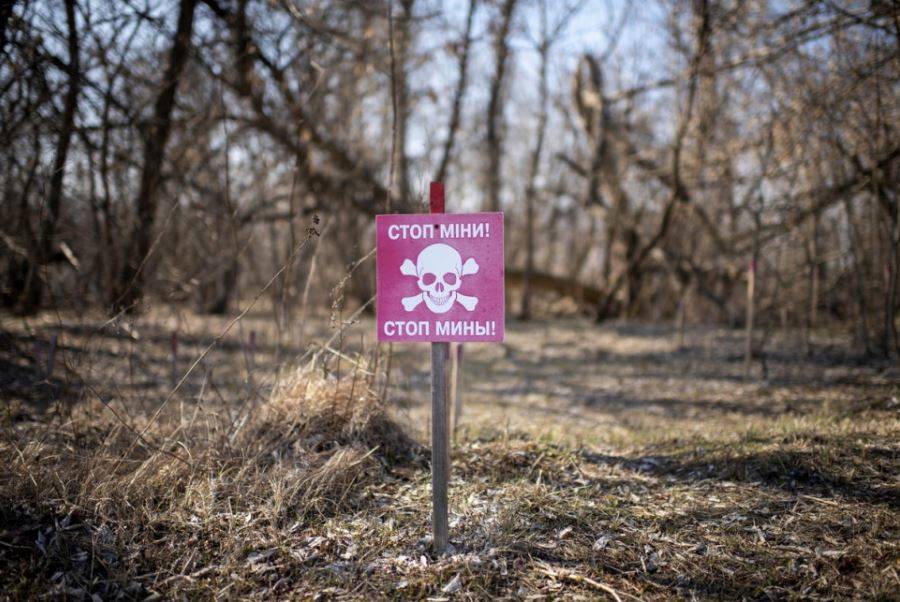 UNHCR, the UN Refugee Agency, is calling for increased efforts to address the dangers and legacy of landmines in eastern Ukraine, one of the most landmine-contaminated areas in the world and where mines continue to be laid in the ongoing conflict. According to the Ukraine Government, the conflict has displaced some 1.36 million people.

Twenty years after the adoption of the Anti-Personnel Mine Ban Convention, also known as the Ottawa Convention, and ahead of this week’s International Day for Mine Awareness and Assistance in Mine Action on 4 April, UNHCR is today seeking to heighten awareness of the horrifying threat from mines, explosive remnants of war and improvised explosive devices in Ukraine.

There is a vital need for the government, humanitarian organizations and all parties to the conflict to expand their mine action work in Ukraine. According to the 2018 Landmine Monitor Annual Report, Ukraine ranked third globally for overall casualties behind Afghanistan and Syria, and landmines and explosive remnants of war continue to kill or injure people.

As in other parts of the world, it is civilians who are particularly at risk. As well as the dangers for anyone forced to flee a conflict, mine contamination also poses serious hazard for refugees and internally displaced people in being able to return to their homes.

In eastern Ukraine, mine contamination affects over two million people, limiting freedom of movement and posing a serious threat to civilians crossing the contact line between government and non-government controlled areas.

The presence of mines and unexploded ordnance means that it is hard, or sometimes impossible, to repair critical infrastructure damaged by shelling, such as water pumping stations that supply water to thousands of people in eastern Ukraine. Mine contamination also impacts people subsistence farming and livelihoods and hinders access to schools and healthcare facilities.

The Ukrainian national authorities estimate that about 7,000 square kilometers in government-controlled areas of Donetsk and Luhansk are contaminated but the full extent of the contamination is not clear. The situation in non-government controlled areas is understood to be acute.

The Government has taken positive steps by adopting Ukraine’s Mine Action Law which came into force on 25 January and a set of National Mine Action Standards for organizations conducting mine clearance operations, based on international best practice, which took effect on 1 April. Adequate funding is now needed to implement the law’s provisions.

UNHCR reiterates the importance of broadening the scope of mine victim assistance to ensure a comprehensive cover for all victims, in line with the United Nations Policy on Mine Victim Assistance. Currently under Ukraine’s Mine Action Law only those under 18 are entitled to financial assistance. The United Nations Policy recommends that landmine victim assistance includes data collection, medical care, physical and other rehabilitation, including psycho-social care.

As a preventative measure, it is essential that all children and adults in eastern Ukraine are taught to identify landmines and explosive remnants of war and shown how to avoid or minimize the risks.

Humanitarian mine action partners in Ukraine started to recruit and train women for demining positions and by the end of 2018 some 20 per cent were female deminers. Many women come from mine-contaminated villages and are working to improve the safety and economic future of their own communities.

In many conflict-affected settings across the world, refugees and internally displaced people remain particularly vulnerable to the threat of mines. Whether fleeing from, through or into contaminated areas, these hazards continue to kill, injure and traumatize individuals and communities.

Mines are also a critical obstacle to safe and dignified returns, posing tremendous dangers for refugees and displaced people around the world who want to return home and inhibiting wider efforts to rebuild communities after the conflict has ended.