Ukrainian family finds a home away from home in Moldova 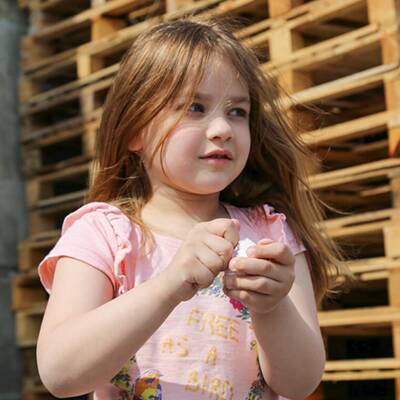 Ukrainian family finds a home away from home in Moldova

Business owners Nadejda and Vitalie converted their office space into a shelter for refugees, including six-year-old Veronika and her family from Odesa., 03 Jun 2022

Nadejda Grosu and Vitalie Ovcearenco had just moved into their new office space in Ialoveni near the Moldovan capital Chisinau when images of refugees fleeing war in Ukraine filled the news channels.

The couple’s company makes wooden pallets for local and export markets, and they were expanding their business when thousands of people – mostly women and children ­– began arriving at the border. Moved by the suffering they saw, they immediately resolved to host as many people as they could.

“We could no longer focus on expanding our business when people were suffering before our eyes,” said Vitalie. “So we started converting our office into a centre for accommodating refugees,”

That involved moving all their equipment back into the small office they had recently vacated, and converting the new office by adding partition walls, installing toilets and plumbing, and buying beds and other furniture to make it as comfortable and welcoming as possible.

Less than two weeks after the start of the conflict on 24 February, Nadejda Karpenko and her daughters Oleksandra, 15, and Veronika, 6, became the first occupants of the newly repurposed office. They had fled after days of incessant bombing near their home in the Black Sea port city of Odesa, leaving Nadejda’s husband and her 20-year-old son behind.

“The trip took us only two hours, but once we reached the border, I didn’t know anyone in Moldova to ask for help,” Nadejda said. But thanks to information shared by volunteers on social networks, she got in touch with her new hosts and make her way to the accommodation.
“That’s how we were connected to Nadejda and Vitalie, and we are so fortunate to have been hosted by this incredibly generous family,” Nadejda said of her Moldovan namesake and her husband.

Since the start of the war, around 480,000 refugees have entered the Republic of Moldova. Most have since moved onward, but some 100,000 ­– mainly women and children – are still in the country, with the vast majority hosted by Moldovan families.

Moldova has responded with a massive mobilization of citizens, grassroots organizations, civil society and government departments to support to the new arrivals.

Online platforms sprang up to link people fleeing Ukraine with those offering help. However, given the proliferation of such networks at the outset of the crisis, the government established a centralized platform – dopomoga.gov.md – to provide information on issues such as housing, transportation and medical care, and to ensure better protection of refugees.
“Nadejda and Vitalie are the epitome of the warm-hearted welcome with which Moldovans have been receiving refugees from Ukraine right from day one,” said Francesca Bonelli, the Representative of UNHCR, the UN Refugee Agency, to the Republic of Moldova. “I would like to thank the government and people of Moldova for opening their borders, homes and hearts to people fleeing Ukraine.”

In Moldova, UNHCR is providing cash grants to refugees such as Nadejda and her family, allowing them to prioritize their most urgent needs, as well as a range of other assistance and protection services. Bonelli reaffirmed UNHCR’s commitment to work closely with the government to ensure refugees receive the support they need.

The World Food Programme is providing similar support to host families like Nadejda and Vitalie to help share some of the costs. “Our guests have received their first payment and we received one-off cash support, which we appreciate,” Nadejda confirmed.
While the family has hosted as many as 20 people at a time, Nadejda and her girls are the only ones who have remained throughout, saying: “We would like to stay close to home and with our friends for life until we are able to return.”

Nadejda and Vitalie say they are willing to help refugees “as long as they need it”, but added that as time goes on, more activities would be needed to keep them occupied. “I would appreciate if some help came from somewhere that can keep our guests busy during the day when we are all busy with our daily routine”, said Nadejda.

UNHCR is working with the authorities to create socio-economic opportunities for refugees and Moldovan youth so they can help themselves and contribute to the national economy.
However, one person who has no trouble keeping herself occupied is Nadejda’s six-year-old daughter Veronika, who spends her days happily playing with her host family’s dog Bars, her many toys and a prized telescope, which she proudly showed off on a video call with UNHCR Goodwill Ambassador Ben Stiller.

However, Veronika’s mother told the actor, producer and director that it was at night when the impact of their situation weighed most heavily on her youngest child. “She misses her brother, grandmother and father. She sometimes cries a lot at night,” Nadejda explained.

“I want to go home,” Veronika added. “I’m missing my playmates Maxim, Andal, Vishnurat and would like to play with them again.”

Until then, she and her family have a safe home with Nadejda and Vitalie, whose response to the crisis reflects the help being offered by so many across Moldova. Stiller summed it up by telling them: “Your generosity is an inspiration to many across the world.”