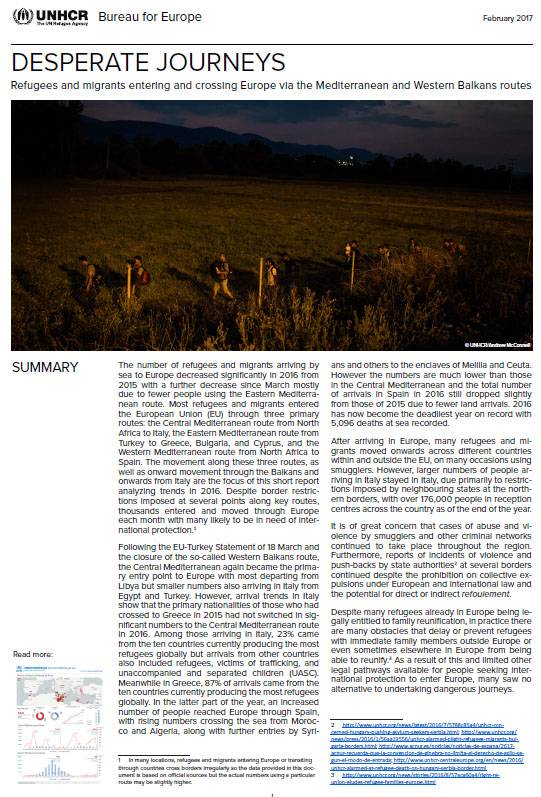 Refugees and migrants entering and crossing Europe via the Mediterranean and Western Balkans routes, 27 Feb 2017

In a new report, UNHCR, the UN Refugee Agency, details the impact of the increased border restrictions introduced in 2016 on refugee and migrant movements towards and inside Europe. It shows that people continued to move but undertook more diversified and dangerous journeys, often relying on smugglers because of the lack of accessible legal ways to Europe.

In total, some 181,436 people arrived in Italy in 2016 by sea, out of which 90 per cent travelled by boat from Libya. Those who came to Italy in 2016 include people in need of international protection, and also victims of trafficking and migrants seeking better lives. The top two nationalities of those arriving in Italy were Nigerians (21%) and Eritreans (11%). A striking feature is the increasing number of unaccompanied and separated children making the journey, over 25,000 in 2016. They represented 14% of all new arrivals in Italy and their number more than doubled compared to the previous year.

The journey to Italy is particularly dangerous, with more deaths at sea in the Mediterranean recorded in 2016 than ever before. Of the 5,096 refugees and migrants reported dead or missing at sea last year, 90% travelled along the sea route to Italy, amounting to one death for every 40 people crossing.

The report also shows that, in the last part of 2016, more people reached Europe through the Western Mediterranean route, either by crossing the sea to Spain from Morocco and Algeria, or by entering the Spanish enclaves of Melilla and Ceuta.

People have continued to leave Turkey along the Eastern Mediterranean route from April onwards, but in much smaller numbers. Most cross the sea to Greece, but some also cross land borders to Greece and Bulgaria, or cross the sea to Cyprus. The use of this route includes a large number of people in need of protection, in 2016 87% of those arriving by sea to Greece came from the top ten refugee producing countries.

This is also the case for those who have continued to move along the Western Balkans route. In Serbia, for example, 82% of those who have arrived are from Afghanistan, Iraq and Syria and almost half are children – 20% of those unaccompanied, though numbers have reduced since April 2016. As a result of stronger border restrictions many rely on smugglers, taking high risks which resulted in several deaths in 2016, says the report.

According to the UNHCR study, tens of thousands of people have been reportedly pushed back by border authorities in Europe, including in Bulgaria, Croatia, Greece, Hungary, Serbia, Spain, and the former Yugoslav Republic of Macedonia, with many cases of alleged violence and abuses in an apparent attempt to deter further entry attempts.

In addition, UNHCR has received deeply worrying reports of refugees and migrants kidnapped, held against their will for several days, physically and sexually abused, tortured or extorted by smugglers and criminal gangs at several points along key routes.

“This report clearly shows that the lack of accessible and safe pathways leads refugees and migrants to take enormous risks while attempting to reach Europe, including those simply trying to join family members.” said Vincent Cochetel, Director of UNHCR’s Europe Bureau.