Angola: UNHCR airlifts aid to newly-arrived refugees from the DRC 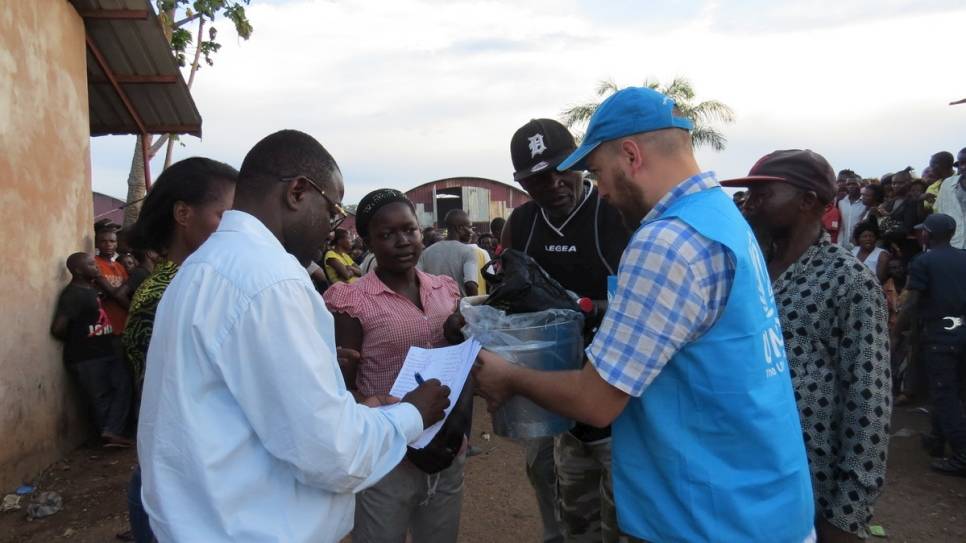 Angola: UNHCR airlifts aid to newly-arrived refugees from the DRC

A plane carrying UNHCR, the UN Refugee Agency, core relief items arrived in Luanda, Angola, to assist over 11,000 people who fled a recent surge of violence in the Democratic Republic of Congo (DRC).
The aircraft, supported by UPS, landed Sunday morning from Dubai, carrying 3,500 plastic sheets as well as 100 plastic rolls to provide shelter during the rainy season, 17,000 sleeping mats, 16,902 thermal fleece blankets, 8,000 mosquito nets, 3,640 kitchen sets, 8,000 jerry cans and 4,000 plastic buckets. UNHCR will be airlifting more relief items to Angola in coming days.
The brutal conflict in DRC’s previously peaceful Kasai region has already displaced more than one million civilians within the country since it began in mid-2016.
Humanitarian assistance to the most recent arrivals will be distributed in Dundo area where refugees have been accommodated in makeshift reception centres since early April. Refugees, including some 4,000 children, are arriving exhausted, many with visible signs of violence, and bringing very little resources with them. Conditions in over-crowded centres are extremely poor.
“Arrivals are in urgent need of life-saving assistance including food, water, shelter and medical services” says Ms. Sharon Cooper, UNHCR Regional Representative for Southern Africa. “UNHCR is also procuring food locally to support the most vulnerable persons including children, pregnant women and elderly.”
A UNHCR emergency team is present both in Luanda and Dundo to respond to the needs of the refugees as well as to coordinate the relief response with the Government, local authorities and partners on the ground.
The government is planning to allocate a new site in Nzaji, Camulo municipality some 90 kilometers from the border. The site was previously used to host internally displaced persons during the civil war in Angola. Preparations are underway to assess the site with a view to eventually provide shelter as well as to set up latrines, showers and water points to relocate the asylum-seekers.
The border is managed by the Angolan Army. The UN Refugee Agency has requested the Government to allow refugees to continue crossing the border, provide unhindered access to UNHCR to assist new arrivals, as well as not to return people fleeing the violence to the DRC.
Angola is currently hosting some 56,700 refugees and asylum-seekers, of whom close to 25,000 are from the DRC.
UNHCR Angola had an initial annual budget of USD 2.5 million to protect and assist some 46,000 people of concern. In response to the current emergency, UNHCR is appealing for a total of USD 5.5 million to provide immediate lifesaving assistance.
UPS is one of UNHCR’s key global emergency partners. Every year, the UPS Foundation contributes logistical expertise, funds and services to support and enhance our emergency response to provide life-saving aid to families forced to flee.
For more information on this topic, please contact:
In Pretoria, Markku Aikomus, aikomus@unhcr.org, +27 81 797 7456
In Geneva, Babar Baloch, baloch@unhcr.org, +41 79 513 95 49