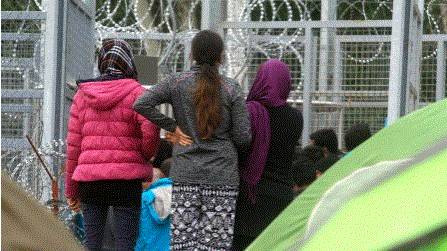 UNHCR, the UN Refugee Agency, expressed today its dismay over recent additional restrictions at border crossing points, which have further reduced access to territory, for asylum-seekers and refugees. It also called the Government of Hungary to withdraw a proposed bill that would deprive people fleeing war, violence and persecution of vital support from NGOs and civil society.

For the past few weeks, UNHCR has observed that the Hungarian authorities are, on average, only allowing two asylum-seekers a day to enter the country through the two “transit zones” at the border with Serbia.

Since asylum-seekers who attempt to cross the razor-wire border fences are automatically removed, Hungary has practically closed its borders to people seeking international protection, in clear breach of its obligations under international and EU law.

UNHCR also has serious concerns at three new legislative proposals submitted by the Hungarian government to the Parliament on 13 February. These proposals clearly target organisations that support the arrival or stay of asylum-seekers and refugees.

“Seeking asylum is a fundamental human right. People should have access to seek protection and no one should be punished for helping those who seek asylum,” said Montserrat Feixas Vihé, UNHCR’s Regional Representative for Central Europe.

As Government support for asylum-seekers and refugees in Hungary has dwindled over time, the role of NGOs has become even more critical.

“NGOs play an essential role in advocating for rights and the rule of law, as well as for the delivery of assistance to refugees and asylum-seekers, including medical and psycho-social care, housing, education, employment and legal aid. NGOs complement the work of governments. Their important work should be facilitated, rather than hampered”, Feixas Vihé added.

Hungary has become increasingly restrictive towards asylum-seekers and refugees in the last years. The building of physical barriers at the border and the introduction of restrictive laws and policies have increased the suffering of people who have often fled unbearable conditions in their countries of origin.

UNHCR urges the Hungarian Government, as an EU Member State, to ensure access to its territory for people seeking international protection.

UNHCR also calls on the Hungarian Parliament not to adopt the proposed legislative package. It is crucial that Hungary remains committed to protecting refugees and asylum-seekers, including by facilitating the essential role and efforts of qualified civil society organizations.