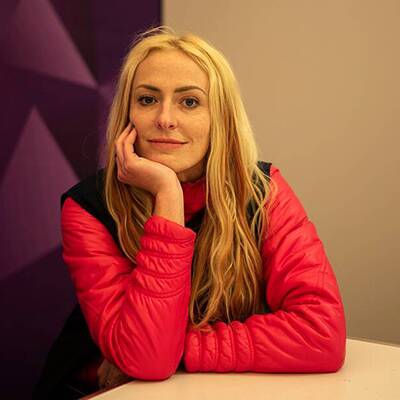 Chisinau, Moldova-Wednesday 23 February was a day like any other in Ukraine’s Mariupol city. Liudmila Prodous, a resident of the port city travelled to Odesa, on the border with Moldova, to attend a workshop. She brought with her Veronica, her only child, to see places.

The next day, the two heard the news on TV of the just erupted war at their hotel room in Odesa, triggering a frantic phone call back home.

“My mother told me that there was a lot of shelling and that the city was in turmoil. She told me that gas, power and water systems were all off and that the temperature had dropped to -6 degrees Celsius”, said the 35-year-old lawyer, her eyes filled with tears.

At first, she thought of going back to Mariupol to join her family, but she quickly realized that she could not dare put her nine-year-old daughter in danger. Two weeks later, they left Ukraine.

“I did not have any option but to cross over to Moldova”, she said, adding that they were warmly welcomed at the border and accommodated in Chisinau.

Victoria Tytarenko fled Mykolaiv with her six-year-old son after two rockets hit a building next to theirs, blowing up the windows of their apartment.

„I thought it was a thunderstorm, but my husband, who had served in the military, recognized what it was and told me that the war had started,” the 26-year-old said. She fled together with her mother, her son, her sister and her nephew, while her husband remained behind. They were all accommodated at the MoldExpo refugee accommodation centre in Chisinau, Moldova.

The MoldExpo also hosts one of the eight UNHCR cash enrolment centres in the country, where refugees from Ukraine can register to receive cash assistance.

Liudmila and Victoria are among more than 30,000 people who have registered for the UNHCR cash assistance and received a prepaid card that they will be able to use in shops and ATMs, giving them the wherewithal to spend on some of their most urgent needs.

“Thanks to the support I can now buy my son his favourite food”, said Victoria, adding, “He has lost his appetite as he misses his father”.

Liudmila, on the other hand, says she would send part of the money to her parents and grandparents back home.

“My daughter and I have received a total of 4,400 MDL. I will convert some of it into a hard currency and send it to my family in Ukraine who have literally nothing to survive on”. Liudmila wants to buy food and clothes for Veronica and to add credit to her mobile with what’s left in order to be able to make phone calls.

UNHCR rolled out the cash programme in Moldova on 25 March, aiming to help refugees from Ukraine cover their most urgent needs and give them the opportunity to buy items and services that they need.

“The assistance primarily benefits the refugees, giving them the freedom to decide on which of their needs to prioritize”, says Francesca Bonelli, the UNHCR Representative in the Republic of Moldova. “But it also helps boost the local economy as we are injecting $45 million into the local market”.

Every refugee receives 2,200 MDL ($120) per month, and UNHCR seeks to reach some 150,000 vulnerable refugees in Moldova with cash grants.

Victoria wants to stay in Moldova to be able to go back home as soon as the war ends. Liudmila, on the other hand, is vacillating between two thoughts.