On World Refugee Day, UNHCR Goodwill Ambassador Ben Stiller calls for equal treatment of refugees - whoever, wherever, whenever 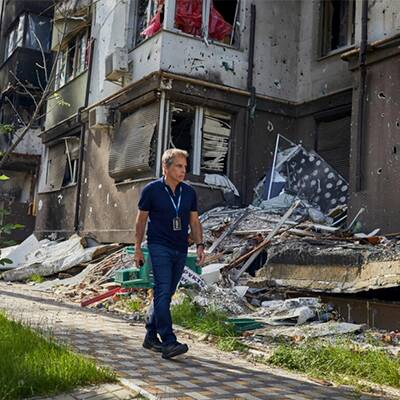 On World Refugee Day, UNHCR Goodwill Ambassador Ben Stiller calls for equal treatment of refugees - whoever, wherever, whenever

Stiller: “Protecting people forced to flee is a collective global responsibility. We have to remember this could happen to anyone, anywhere.”, 20 Jun 2022

GENEVA – Today, on World Refugee Day 2022, Ben Stiller, Goodwill Ambassador for UNHCR, the UN Refugee Agency, called for compassion and support for all refugees around the world and those forced to flee.

During a visit to Poland and Ukraine this week, where Stiller is meeting those recently forced to flee their homes, the actor, director, and long-term Goodwill Ambassador for UNHCR, is calling for urgent global support and funding, not only for those affected by the Ukraine crisis, but for every one of the 100 million around the world who have been forced to flee.

“I’m here meeting people forced to flee their homes due to the war in Ukraine.

People have shared stories about how the war has changed their lives - how they’ve lost everything and are deeply worried about their future.

Over the years I’ve had the chance to meet refugees and asylum seekers from around the world-from Syria, Central America, Afghanistan, Iraq, and now Ukraine.

In so many parts of the world, war and violence devastate people and leave lasting traumatic effects. Wherever and whenever it happens, nobody chooses to flee their home.

Seeking safety is a right and it needs to be upheld for every person.

Protecting people forced to flee is a collective global responsibility. We have to remember this could happen to anyone, anywhere.”

Since Saturday 18 June, Stiller has been in Poland and Ukraine meeting with individuals and families who have been displaced due to the war. In Rzeszow, Poland, he met with Marina, who fled Kharkiv, Ukraine, with her three children two months ago and is now living with her sister where she works in a nail salon. Shortly after Marina and her children fled Ukraine, her father was killed back in Kharkiv after a bomb fell on her parent’s apartment building. Marina’s mother is now living in Rzeszow with her and her sister. The family want to return home to Ukraine but their neighbourhood has been devastated by the war. For now, they plan to stay in Poland where they are receiving ongoing support from UNHCR.

The war in Ukraine is driving the fastest and one of the largest forced displacement crises since World War II. Families have been torn apart and the trauma of war will have a lasting impact on many of those forced to flee their homes, including women and children, who represent some 90 per cent of those forced to flee.

UNHCR is on the ground inside Ukraine and in neighbouring countries working with partners delivering shelter support and emergency supplies, including blankets, mattresses, and clothes, and launched a cash assistance programme to help families meet their most urgent needs with dignity. UNHCR and its partners are helping reach and protect some of the most vulnerable refugees, including with specialist care for women, children, the elderly and those with special needs.