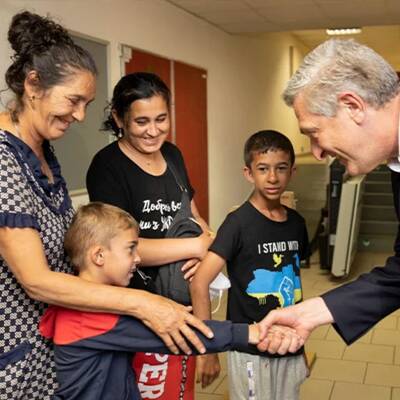 Prague – I have just returned from the Czech Republic, where I met government representatives as the country prepares to take over the Presidency of the European Union (EU) on 1 July. It comes during a key period when the EU and its Member States, along with other countries, continue to show remarkable support to refugees from Ukraine and to neighbouring host countries, following the unprecedented decision in March to activate the Temporary Protection Directive.

The response to the Ukraine refugee situation has highlighted Europe’s capacity for an organized and workable approach to asylum – one that benefits states and safeguards the rights of refugees. The Czech Republic itself has been generously and effectively hosting one of the largest populations of Ukrainian refugees in Europe. As such, under its Presidency, the country has a unique opportunity to harness this experience and encourage further progress in EU asylum reform.

I am hopeful that the incoming Presidency will build on the good work of the outgoing French EU Presidency, and the European Commission, which together have been instrumental in pushing forward the Solidarity Declaration. This voluntary scheme would provide for relocation places as well as financial support, and responsibility-sharing across the bloc with those EU Member States where most asylum seekers arrive. I trust that the Declaration and any forthcoming pledges will help to ensure greater responsibility-sharing for asylum seekers, and ultimately better protection for people fleeing war, violence and persecution.

UNHCR encourages EU Member States under the Czech Presidency’s leadership to translate this political commitment into prompt and practical action for those most in need.

UNHCR remains ready to support the Czech Republic and other EU Member States to continue on this positive path towards a European Union that better protects refugees across the continent and beyond.