Español
Language
Overview
UNHCR has been in Angola for 43 years since the signing of the ‘Accord de Siege’ in February 1977. During this time, UNHCR has played an important role in the history of Angola such as leading the repatriation of Angolans who fled the long civil war. With reestablishment of peace in 2002, the Government of Angola asked for UNHCR support to facilitate repatriation of Angolan refugees. After voluntarily repatriations took place, from 2003 until 2015, more than 523,000 Angolan refugees returned, more than half coming from the Democratic Republic of Congo (DRC). From 2015 to 2016, UNHCR Angola operation focused on urban refugees and asylum seekers. In 2017, influx of refugees fleeing Kasai region in DRC forced the operation to scale up. Initially, refugees arrived from DRC were hosted in two transition centres in Dundo. Then, the Field Office Dundo was established and, eventually, the Lovua Settlement. Currently, there are more than 56,000 refugees and asylum seekers in Angola spread over provinces such as Luanda and Lunda Norte. These refugees represent a multitude of countries such as the DRC, Rwanda, Mauritania and others. They are located in several provinces across Angola, including Luanda and Lunda Norte. .UNHCR is a key observer of the National Council for Refugees (CNR) and works with several partners on the ground to ensure that refugees and stateless people are protected and have access to livelihood and durable solutions.
Total Population of Concern JSON
56,004
Last updated 31 Dec 2022
Source - UNHCR, Government
Total Refugees JSON


Out of the total number of refugees in Angola, 9,258 are refugees from the Democratic Republic of the Congo pertaining to the Kasai caseload.
25,522
Last updated 31 Dec 2022
Source - UNHCR, Government
Total Asylum-Seekers JSON
30,280
Last updated 31 Dec 2022
Source - UNHCR, Government
Total Others of Concern JSON
202
Last updated 31 Dec 2022
Source - UNHCR, Government
Refugees and Asylum-Seekers by Country of Origin JSON  .CSV
Refugees from DRC include regular caseload and Kasai caseload. Kasai caseload are the refugees originating from Kasai region of DRC who came to Lunda Norte province in Angola as a result of conflict in 2017 and were given Prima Facie refugee status. The regular caseload consists of the remaining population excluding the 2017 Kasai caseload and comprises of refugees and asylum-seekers who came to Angola as far as 35 years ago. The regular caseload includes urban refugees from different nationalities including Congolese, a majority of them settled in Luanda but also in the other 12 provinces.

Refugees and Asylum-Seekers by Sub-location JSON 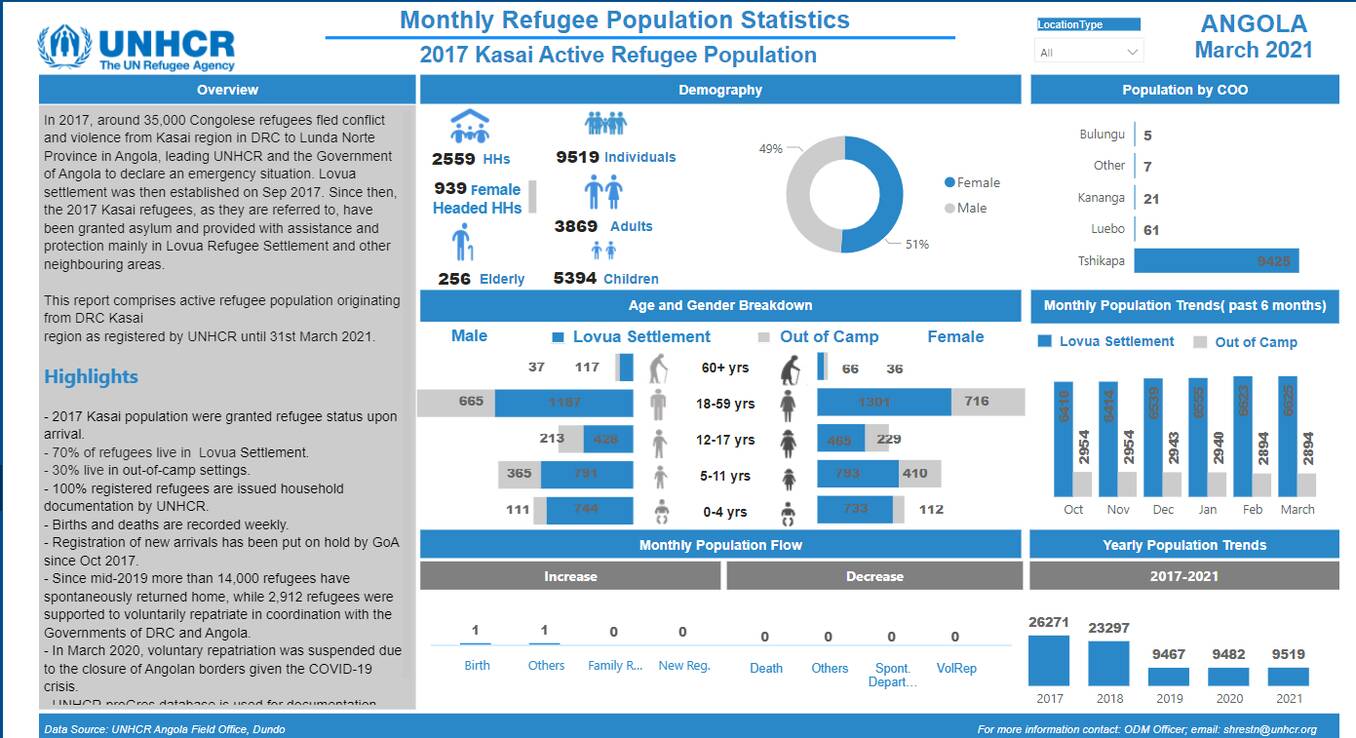 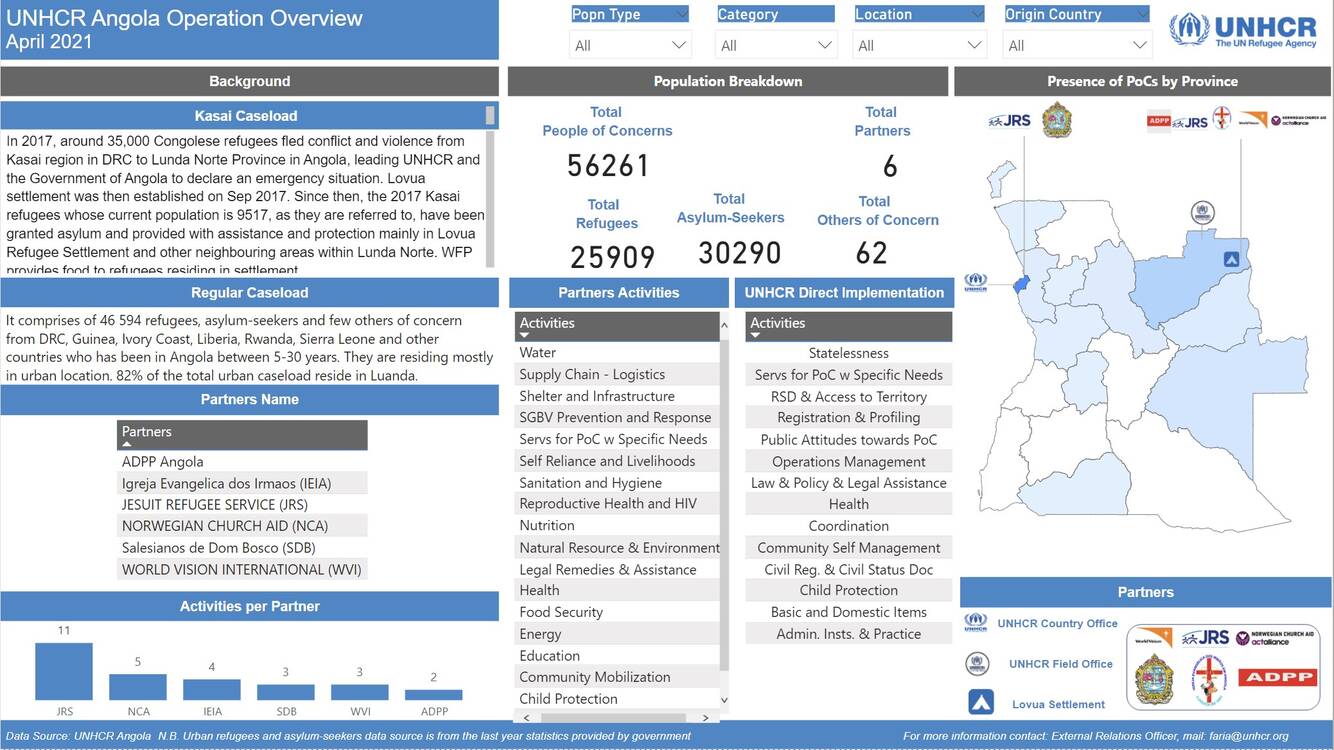 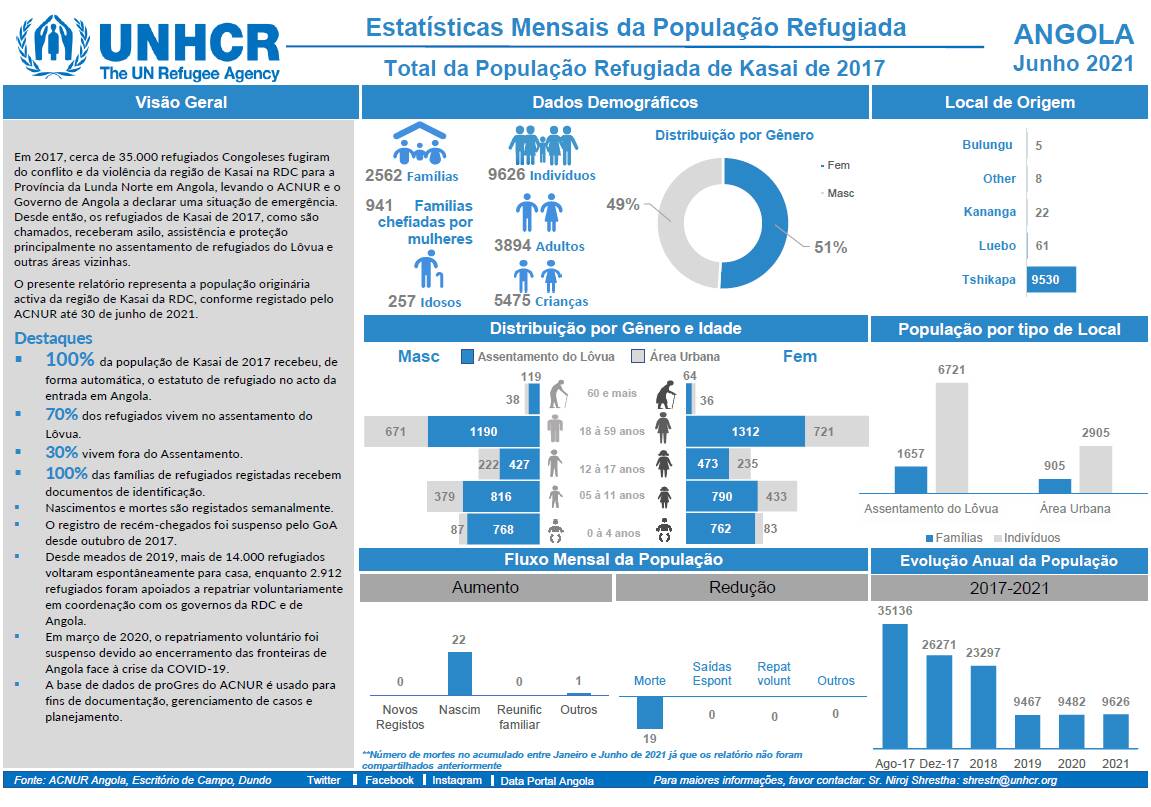 Latest Documents
View all (463)
Refugees and Asylum-Seekers in Angola